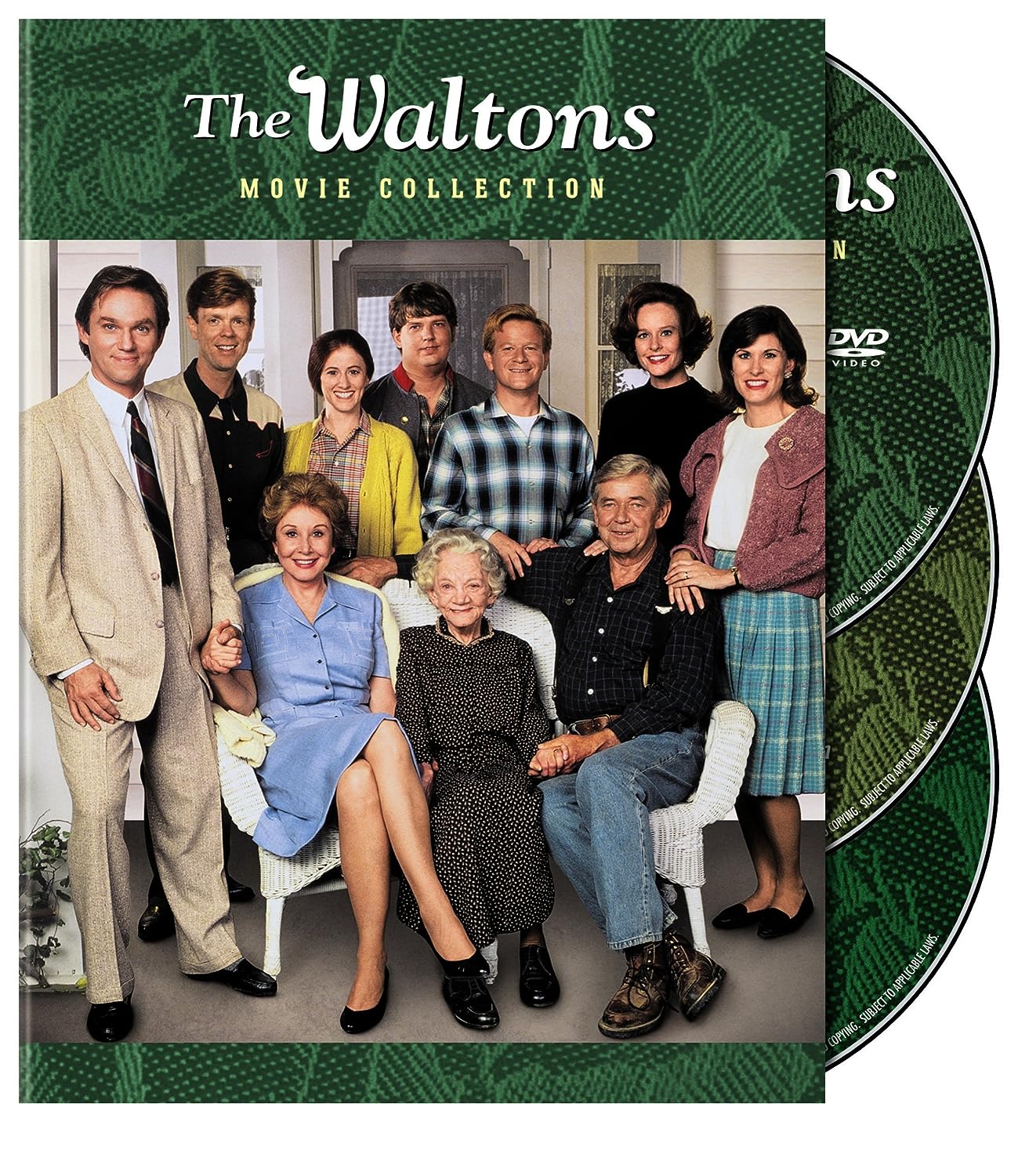 Waltons, The: The Movie Collection (DVD)

Honesty. Integrity. Family. Stories of a family's - and a nation's - yesteryear continue in six Reunion Movies. Set in the 1940s are A Wedding on Walton's Mountain (will Erin have a change of heart?), Mothers' Day on Walton's Mountain (honoring the person everyone turns to when crises arise) and A Day for Thanks on Walton's Mountain (with Robert Wightman as John-Boy). Taking place in the 1960s and featuring Richard Thomas as John-Boy are A Walton Thanksgiving Reunion (as a nation mourns the death of JFK), A Walton Wedding (no big-city Manhattan nuptials for John-Boy) and A Walton Easter (Happy 40th, John and Olivia!). Six warm Walton memories are yours to share. For fans of the family-friendly classic TV series, this 3-disc set features six made for television holiday-themed movies.

Who says you can't go home again? Throughout six post-series reunion movies, the Walton home still stands, "generous in its love, filled with memories, and always ready to welcome us." From the first gathering of the far-flung mountain clan in "i"A Wedding on Walton's Mountain (1982) to the final goodnights in A Walton Easter (1997), these uplifting and heartwarming films are quality time spent with one of America's favorite TV families. Each film amounts to a Very Special Episode of the top-rated, Emmy-winning TV series, rich with family milestones (weddings and births), and crises that will test and reaffirm the family credos of hard work, common sense, and faith. Most of the original cast is back. The late Will Geer, as Grandpa Walton, is sadly absent, and Ellen Corby, who suffered a stroke in 1977, plays a diminished role as Grandma Walton. The character of John-Boy, the aspiring writer whose reminiscences of life on Walton's Mountain were the heart of the series, is absent in the first two films and is portrayed by Richard Wrightman in A Day for Thanks on Walton's Mountain. With all due respect, we know John-Boy, we consider John-Boy to be a friend, and you, Mr. Wrightman, are no John-Boy. No, that would be Richard Thomas, who won an Emmy for his iconic role, and makes a welcome return in "i"A Walton Thanksgiving Reunion (1993), which jumps ahead nearly two decades to 1963, the same time frame as the third season of "i"Mad Men. Suffice to say, different worlds, as witness the charming scene in "i"A Walton Wedding (1995) in which the wedding party sings "Bicycle Built for Two" while seeing off John-Boy and his bride. There is a circle-of-life satisfaction to the final film in the set, "i"A Walton Easter, in which John (Ralph Waite) and Olivia (the ageless Michael Learned) celebrate their 40th wedding anniversary, and John-Boy contemplates returning to Walton's Mountain for good. "There's so much more out there beyond Walton's Mountain," a no-good former boyfriend cajoles the now-betrothed Erin in A Wedding on Walton's Mountain. But as these six films, celebrations of home and hearth brimming with life and unconditional love, remind us, why would you ever want to leave? "i"--Donald Liebenson

Enter for a chance to have dinner with Michelle Obama in Washington, D.C.

October 9, 2021
Would you like to have dinner with Michelle Obama in Washington, D.C.? A Case Western Reserve University student will be selected to join a...
Student Life 0

Pumpkin pie shake is back at One to One Fitness Center

October 8, 2021
Refuel, reboot and recover with a favorite shake at One to One Fitness Center’s Recovery Zone. Located inside the center and open to the pu...
Campus Updates 0

October 8, 2021
The Office of the University Registrar has replaced the former Action Form for Majors/Minors/Programs/Sequences/Degrees with an electronic ...
Faculty & Staff 0

October 1, 2021
In the early 1990s, the launch of Microsoft Windows and introduction of the World Wide Web set Mark Herron on an unexpected path that would...
5questionsFeaturedPeople 0

September 30, 2021
Jackson Schrader came to Case Western Reserve with many talents: A three-sport athlete in high school, he was also an accomplished musician...
FeaturedPeople 78

Interested in participating in a research study? Looking for an upcoming event in your department?

Check out what's happening on campus and post your own event or news on the community bulletin board.